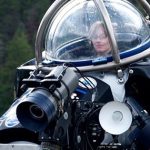 Allyson holds degrees in microbiology (B.Sc. Guelph), bioarchaeology (M.A. Western) and earth science (PhD McMaster) and is actively involved in microbial ecology and astrobiology research. Her areas of interest are understanding geochemical controls on microbial distribution and abundance, biogeochemical cycling, life in extreme environments on Earth, integrating science and operations into mission planning, and identifying what signs of life might be left behind once that life is no longer there (biosignatures). She has participated in several NASA and Canadian Space Agency supported analogue research programs and her work has taken her to field sites in the Antarctic, hot springs in Western Canada, volcanoes in Hawaii, and piloting single-person submersibles underwater in B.C. 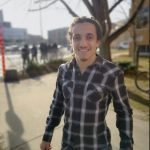 Mohamed El-Waraky is a Ph.D. student in the Environmental organic geochemistry research group at McMaster University. Mohamed holds a Bachelor’s degree from Alexandria University and a Master’s degree from the University of Tulsa. His research interests involve studying the sources and biodegradation potential of contaminants, such as hydrocarbons and Naphthenic acids, in Base Mine Lake (An end pit lake demonstration for the reclamation of oil sand tailings in Alberta). This research detects sources of input and biodegradation signatures through characterizing the molecular fingerprint distribution of hydrocarbons and NAs using the high resolving power of multidimensional chromatography (GCxGC).  Mohamed’s hobbies include running, hiking, playing music, and reading. 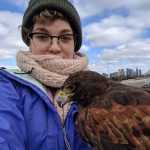 Sian Ford is a PhD student in Earth Sciences and Astrobiology. Her research involves using an interdisciplinary approach to help answer fundamental questions regarding the search for life in space, and the origin of life here on Earth. By detecting and characterizing microorganisms living at the very limits of terrestrial life as we know it, we can better understand where and how organisms might live on other planets such as Mars, or moons such as Titan. Additionally, Sian works specifically with membrane phospholipids and their interaction with aqueous-mineral environments and how this may have contributed to the origin of cellular membranes 4 billion years ago. In her spare time Sian enjoys bird watching, table-top RPGs, video games, and watercolor painting. Fun fact: during her Master’s degree with Dr. Slater, Sian had a part time job doing falconry. 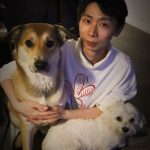 Han is a Ph.D student in the Environmental Geochemistry Group at McMaster University. He completed his B.Sc in Environmental Engineering at East China University of Science and Technology, Shanghai, and obtained his M.Sc in Environmental Science from University of Toronto. Currently his principal research is focused on the investigation of low-molecular-weight organic compounds in the Base Mine Lake—the first demonstration oil sands pit lake located at Alberta, Canada. With the utilization of comprehensive two-dimensional gas chromatography coupled with time-of-flight mass spectrometry (GCGC-TOFMS), it is now feasible to separate the targeted compounds sufficiently from the complex mixture for the further assessment of their transport patterns and environmental fate. Outside the campus, he is a dog lover, movie critic and amateur chef. Most importantly, he believes that Marvel makes way better movies/shows than DC. 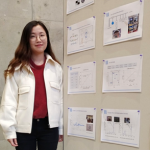 Chenlu Wang is a PhD student in Analytical Chemistry at McMaster University. She joined the Environmental Organic Geochemistry Lab in 2021. She obtained her M.Sc and B.Sc degree from Wuhan University, China. Her works focus on understanding how the organic matter is microbially cycled through Base Mine Lake, the first full-scale demonstration oil sands end pit lake in northern Alberta, Canada. She will use carbon isotopic analysis in lipids to investigate the microbial carbon cycling within the environment. Chenlu likes sports, such as running, badminton and volleyball. She enjoys photography and cooking in her free time. 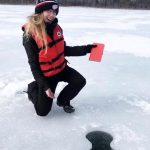 Robbyn is a M.Sc student in the Environmental Geochemistry Group at McMaster University. She completed her undergraduate degree in Earth and Environmental Science at McMaster University. Her project is centered around the End Pit Lake remediation project in the Athabasca Oil Sands Region in Alberta, Canada, and Lake St George in Ontario, Canada. She is specifically investigating how microbe facilitated biogenic methane is generated and oxidized under seasonal ice cover conditions. She uses PLFA and carbon isotopic analysis in the lipids to investigate the microbial methane cycling within the respective environment. Robbyn is a beloved animal enthusiast and enjoys a nice coffee reading in her hammock. 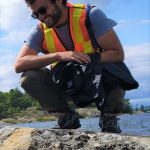 Johnny Pereira
Johnny Pereira started his MSc. in Earth Sciences and Astrobiology in 2020/21. After doing his undergraduate thesis also in the Organic Geochemistry Lab doing research within Base Mine Lake’s microbial compositions and carbon isotope analysis, his Master’s research involves Nuclear Waste Management and determination of endospore and microbial analysis of Bentonite clay, a key material in the multi-barrier system. Endospore survival in this environment can have applications towards survival of dormant cells in harsh environments on other planets such as Mars. Johnny is an avid biker and rock enthusiast. 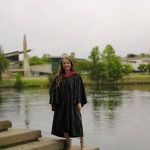 Rebecca Hale
Rebecca Hale completed her undergraduate degree at Trent University studying Forensic Science. During this time, she completed a thesis project studying the changes in community consumption of cannabis pre-and post-legalization using wastewater based epidemiology. Her current MSc project focuses on the concentrations of dichlorodiphenyltrichloroethane (DDT) and its metabolites in the sediments of Cootes Paradise following the insecticides detection in leopard frogs in 2019. Determination of the persistence of these compounds can be used to inform the potential need for remediation and prevent further biomagnification to highly susceptible species including birds of prey. Outside of academics Rebecca enjoys playing with and training her dog, baking, hiking and travelling. 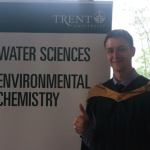 Jacob obtained his Undergraduate Degree in Environmental Chemistry from Trent University and is currently completing his Masters in Earth & Environmental Sciences at McMaster. His research aims to better understand the Environmental Fate of Bitumen-derived Organics within Base Mine Lake (BML); the first demonstration of End Pit Lakes (EPLs) as a long-term remediation strategy in Alberta, Canada. His two major research questions are: 1) Is microbe-facilitated gas ebullition/bubbles an influential factor for Fate and Transport of Organic Contaminants within BML sediments? and 2) What can Ultra-High Resolution Mass Spectrometry unveil about the chemical speciation and environmental fate of Water-Soluble Organics and Petroleum Hydrocarbons within BML surface water and pore water; and does the choice of solvent have a profound influence on the chemical fingerprint of BML water samples? In his free time, he enjoys hiking with his dog Charlie, gardening with friends and family, and playing competitive Volleyball/Badminton. 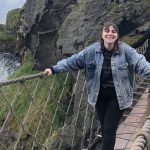 Lexi is an MSc student in Earth Sciences and Astrobiology. She obtained her BSc and MES from University of Guelph, with a focus in microbiology and bioinformatics. Her MES research investigated the composition and genetic potential of microbial communities associated with pumice rafts, which have been posited as a potential substrate for the origin of life on Earth. Lexi’s current research involves studying the microbial communities and associated biosignatures in some of the most inhospitable environments on Earth, in order to inform the search for life elsewhere in the solar system. In her free time, Lexi enjoys spending time with her two adorable cats, baking bread, playing D&D, and watching Star Trek.

UNDERGRADUATE STUDENTS
PAST STUDENTS OF THE ENVIRONMENTAL ORGANIC GEOCHEMISTRY GROUP